Camel caravan in a desert

So, there we were: show week.  For 15 weeks it had been sitting on the far horizon just beyond our reach and nicely out of view.  Now that reprieve was over and it was right there in front of us shining with its jazz hands glittering in the spotlight.  Or something like that.  Whether you like the metaphor or not it was right there coming at us like a steam roller.  Ok, enough.

The thing was that those of us on the creative team had seen its shadow looming and heard the roar of the feedback some weeks before.  We had tried so hard to remind everyone that it was coming and would not be stopped.  The notebook had been out in full glory and it had started to look like dividends would be paid.  And then again there just didn’t seem to be that spirit of urgency that us creatives were feeling.  Other people might refer to it instead as clinical stress.  I call it creative fever.  Desperate were we to get the whole production over the line yet happy was everyone else to plod on to the finishing line like Brummy Wildebeest from the days of Just So.  Oh how hard it was to stay calm and enjoy “the process” from T (thereabouts) to Z (err, Zuper?)  Thank goodness for prayer and jelly beans. 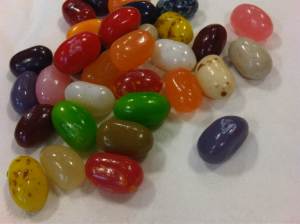 So there we were.  Dress rehearsal day.  The set was already built and standing in its theatrical glory.  The pyramids were set onto the blue sky background and cunningly covered up by the black back-cloth (with its tasteful yet accidental tie-dye effect).  The doorway disguised as a Bible was in place and ready to be opened to reveal Joseph in his opening dream sequence.  The giant Pharaoh’s head was painted and waiting in the wings with Joseph’s glorious chariot of gold.  So much promise and potential waiting to be brought to life.  Dress rehearsal day was the day of delivery for two other important pieces of set: the steps and the chaise lounge.

You will remember my excitement and trepidation in forming the Joseph Children’s Choir for the show.  The whole plan had hinged on them being able to sit on raised steps which would sit at stage height and rise above the stage so they could always be seen by the audience (and could also see the on-stage action too).  This had started to look like an impossibility.  We were trying to think of other ways to create height differentials but none of them filled me with excitement or anything other than dread.  Then I remembered a very nice man mentioning that he might be able to ask for a loan of some stage steps from the school where he works (Thank you, Alex!).  The possible problems were too many to consider.  What size would the steps be?  Would they be high enough?  Small enough?  Bright green (always a possibility although admittedly unlikely)?  Yet, on that fair dress rehearsal day (actually I think it was raining but go with it for a moment), he came up trumps and with a little help from the man with the van (thank you, Gary!) the much-longed for steps arrived.

In the words of someone in the cast of “Cinderella”: “it fits”!  Ok, the grammar is bad and poor but it was amazing to see them in situ.  The steps were exactly as I had visualised and within 2 inches of the space we had on the stage for them.  They were not a funny colour but black, just like the rest of our stage, and they were the perfect height.  Not too high so that anyone on them would suffer from vertigo but not so small that the Choir would never been seen by anyone beyond the front row.  They fitted the space perfectly and allowed us to have them on a slight angle exactly as I had originally planned (and drawn in my notebook).  I have never before thought of steps as an object of beauty but, on that day, I did.  I really did.  I practically hugged them.  The steps, that is.

Not just did the steps arrive in their glory (and they have been photographed enough that they will never be forgotten) but another critical piece of stage kit also arrived that day.  For weeks we had been asking around for anyone with a chaise lounge to come forward.  Yes, it was a long shot.  A very long shot, but you never know and if you don’t ask, you don’t get.  Nothing had come up.  We were debating how to make a garden chair and a footstool look like a chaise and be sturdy enough to be stood on safely by one Mrs Potiphar during a rather vigorous dance routine as she seduces Joseph.  However, little known to us, a very nice man (thank you, Philip!) was ringing around all the local charity shops and anywhere he could think of to see if anyone had a chaise lounge we could borrow for the week.  He clearly had a wonderfully persuasive manner and, after many calls, won over a local charity who just happened to have a blue chaise in one of their furniture sales shops.  So there it was, a beautiful, traditional, blue chaise lounge.  Ours for the week for the price of a donation and some notifications.  Every night it made a starring appearance in the Potiphar number and, like the steps, has paraded its face in front of our cameras enough that it too will stay in the Barnstormers’ archives long after its return to the shops.

And so it was that the final set was ready.  All that remained was the big workshop day, dress rehearsal, technical set up and rehearsal, extra costume run and then, the big day.  Curtain up.

[Photo of “Camel caravan in a desert” by m_bartosch: http://www.freedigitalphotos.net/images/view_photog.php?photogid=681 ]